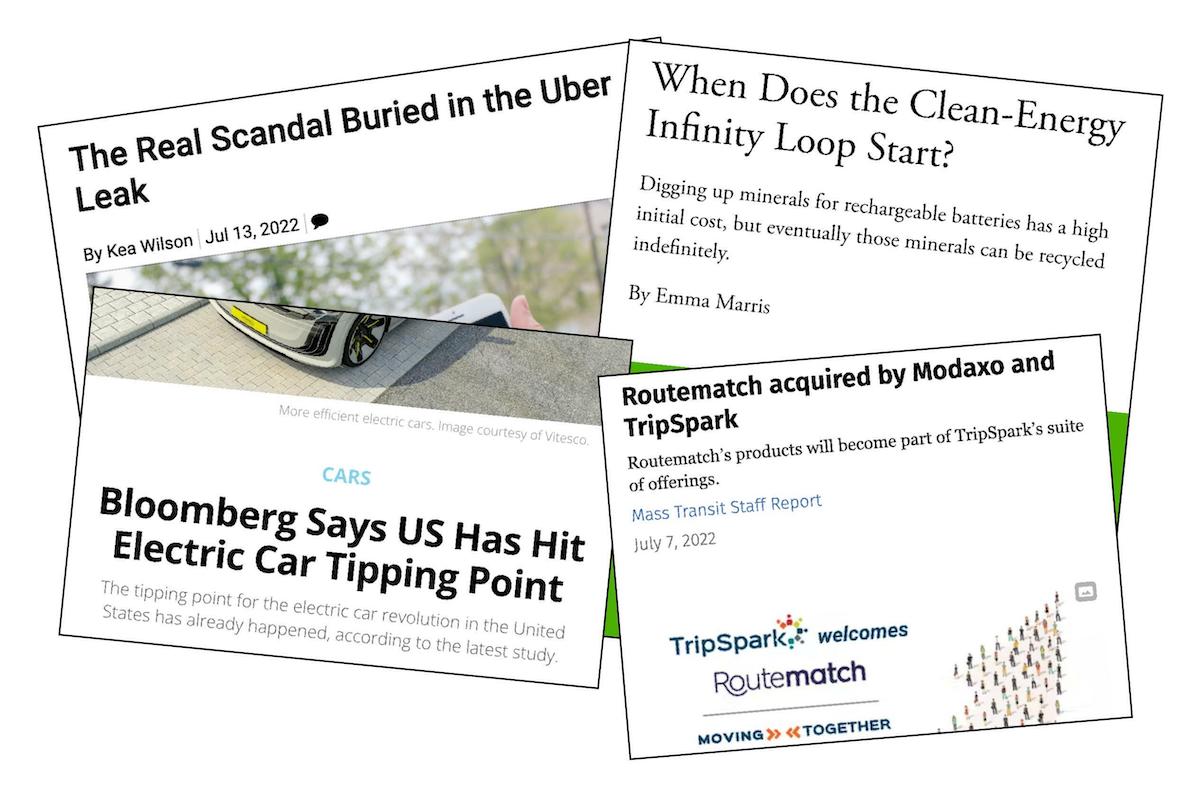 Proposed changes to NTD reporting, electric cars hit a “tipping point”, the equity of cashless fare systems, and understanding the “Uber files.” These are just a few of the over 25 articles on transit technology aimed at mobility managers, brought to you by the National Center for Mobility Management.

The Real Scandal Buried in the Uber Leak by Kea Wilson, Streetsblog USA
“Substantially less ink was allocated, though, for how these outrages directly accelerated Uber’s transformation of city transportation networks — or its harmful impact on many city residents, whether or not they ever used the app.”

The world is rightly appalled by the Uber files – the drivers aren’t so surprised by Alex Marshall, The Guardian
“My union, the IWGB, has been fighting tooth and nail for the rights of Uber drivers. It feels like the only way to trigger change”

How The Ride-Sharing Revolution Failed Passengers With Disabilities by Andrew J. Hawkins, The Verge
“Uber and Lyft could have stepped up when public transportation fell short — but over a decade later, activists still fight for equitable service”

Uber settles with Justice Department on complaint it violated the Americans with Disabilities Act by Dan Zukowski, Smart Cities Dive
“Wait time fees unfairly affected individuals who need more to time to get in an Uber car, and the ride-hailing company commits to changes.”

Uber Pool Is a Zombie By Saahil Desai, The Atlantic
“Shared rides are back for the first time since March 2020. Did anyone notice?”

GM’s Cruise robotaxi unit drives deeper into the red by Joseph White, WTVB
“General Motors Co has lost nearly $5 billion since 2018 trying to build a robotaxi business in San Francisco, and now as the automaker’s Cruise unit starts charging for rides, the losses are accelerating.”

Bloomberg Says US Has Hit Electric Car Tipping Point by Steve Hanley, CleanTechnica
“Now Bloomberg (paywall) is telling its subscribers that electric cars have passed a critical tipping point in the US and that a quarter of all new cars sold in America will be electric by 2025, several years earlier than expected.”

When Does the Clean-Energy Infinity Loop Start? by Emma Marris, The Atlantic
“Digging up minerals for rechargeable batteries has a high initial cost, but eventually those minerals can be recycled indefinitely.”

Battery recycling could be the next investor darling of the EV era by Jaclyn Trop. The Verge
“Automakers and suppliers, keen to fortify an EV supply chain and avoid raw materials shortages, are turning to a domain once overlooked: battery recycling. Suddenly awash in interest from EV makers and venture firms, the sector has seen a spate of partnerships and funding deals in the past 18 months.”

How eight school buses are helping during power shortages: They’re transporting electrons by Rob Nikolewski, Los Angeles Times
“A fleet of electric-powered school buses in El Cajon can send electricity back to California’s grid, thanks to first-of-its kind technology developed by a San Diego company and a partnership with San Diego Gas & Electric. And soon other school districts in the area will be able to do the same. ‘These buses are like storage on wheels,’ said Gregory Poilasne, chief executive of Nuvve, a technology company that specializes in advancing what’s called vehicle-to-grid projects.”

Amazon starts delivering packages with Rivian-built EVs by Kirsten Korosec, TechCrunch
“Amazon has started delivering packages in more than a dozen cities using the custom electric van built by Rivian. The initial rollout, which kicks off in Baltimore, Chicago, Dallas, Kansas City, Nashville, Phoenix, San Diego, Seattle and St. Louis, will eventually spread to more than 100 cities by the end of the year, Amazon said. The end goal, at least for now, is to have more than 100,000 EV delivery vans on the road by 2030.”

USPS will make 40% of its new trucks electric, up from 10% by Jacob Bogage, The Washington Post
“Postmaster General Louis DeJoy’s new push for EVs brings the agency closer to conforming with President Biden’s far-reaching climate goals”

Transport Apps Promised to Eliminate Friction. But at What Cost? by Paris Marx, WIRED
“The decisions of venture capitalists to fund companies that are transforming the way we move, consume, and conduct our daily lives should not be perceived as neutral actions. Rather, they are pushing visions of the future that benefit themselves by funding the yearslong efforts of companies to monopolize their sectors and lobby to alter regulatory structures in their favor.”

How SaaS is creating efficient public transit by Gordon Feller, Electronics360
“The future consists of SaaS models for more flexible updates, more reliable applications, ease-of-integration and cost savings for both the end user and city.”

This small city ditched its buses. Its public Uber-like service has been a big hit by Nick De La Canal, NPR
“Some cities and towns around the U.S. have begun to embrace the model, including the small city of Wilson, North Carolina, population 49,000. The town, about 55 miles east of Raleigh, took the dramatic step of replacing its bus system with on demand minivans about two years ago, and says it’s been a game changer for residents.”

Equity And Exclusion Issues In Cashless Fare Payment Systems For Public Transportation by Aaron Golub, John MacArthur, Sangwan Lee, Anne Brown, Candace Brakewood, and Abubakr Ziedan, Transportation Research Interdisciplinary Perspectives
“The study asks: who is most at risk of being excluded by the transition to new fare payment systems and how would riders pay transit fares if cash payment options were reduced or eliminated? Researchers answer these questions using intercept surveys of 2,303 transit riders in Portland-Gresham, OR, Eugene, OR, and Denver, CO.”

The State of America’s Free Transit Programs, Planetizen
“Dozens of cities made public transit free during the pandemic. Can transit agencies sustain these programs?”

Other News Involving Transit and Technology

National Transit Database Reporting Changes and Clarifications, United States Federal Register
This notice provides information on proposed changes and clarifications to the National Transit Database (NTD) reporting requirements. Some of the proposed NTD changes would take effect beginning in NTD report year (RY) 2023 or 2024, which corresponds to an agency’s fiscal year, while others would take effect in calendar year (CY) 2023.

Routematch acquired by Modaxo and TripSpark by Mass Transit
“Routematch’s products will become part of TripSpark’s suite of offerings. This is the second acquisition Routematch has experienced in two years; it was first acquired by Uber in July 2020. Routematch will become part of TripSpark’s suite of solutions and will remain as a brand, which a spokesperson for Modaxo explains provides customers with expanded choice for the products and services they invest in.”

High Gas Prices Are Revving Up This Online Anti-Car Movement by Imad Khan, CNET
“The anxiety over cars is spilling out online.”

UITP’s ‘Lecco declaration’ creates framework to improve transit accessibility by Mass Transit
“The declaration includes four principles organizations can use to build on and improve upon their own implementation of steps to deliver more accessible transit systems.” Among the principles is, “Technological developments have the potential to reduce or overcome access barriers providing new solutions.”

It’s been a busy month in the world of mobility technology news: Elon Musk using AVs as “drama”, “Autono-MaaS”, Amazon…

Hard times and “fake” financials for Uber and Lyft, a new universal mobility pilot in L.A., AV buses will still…