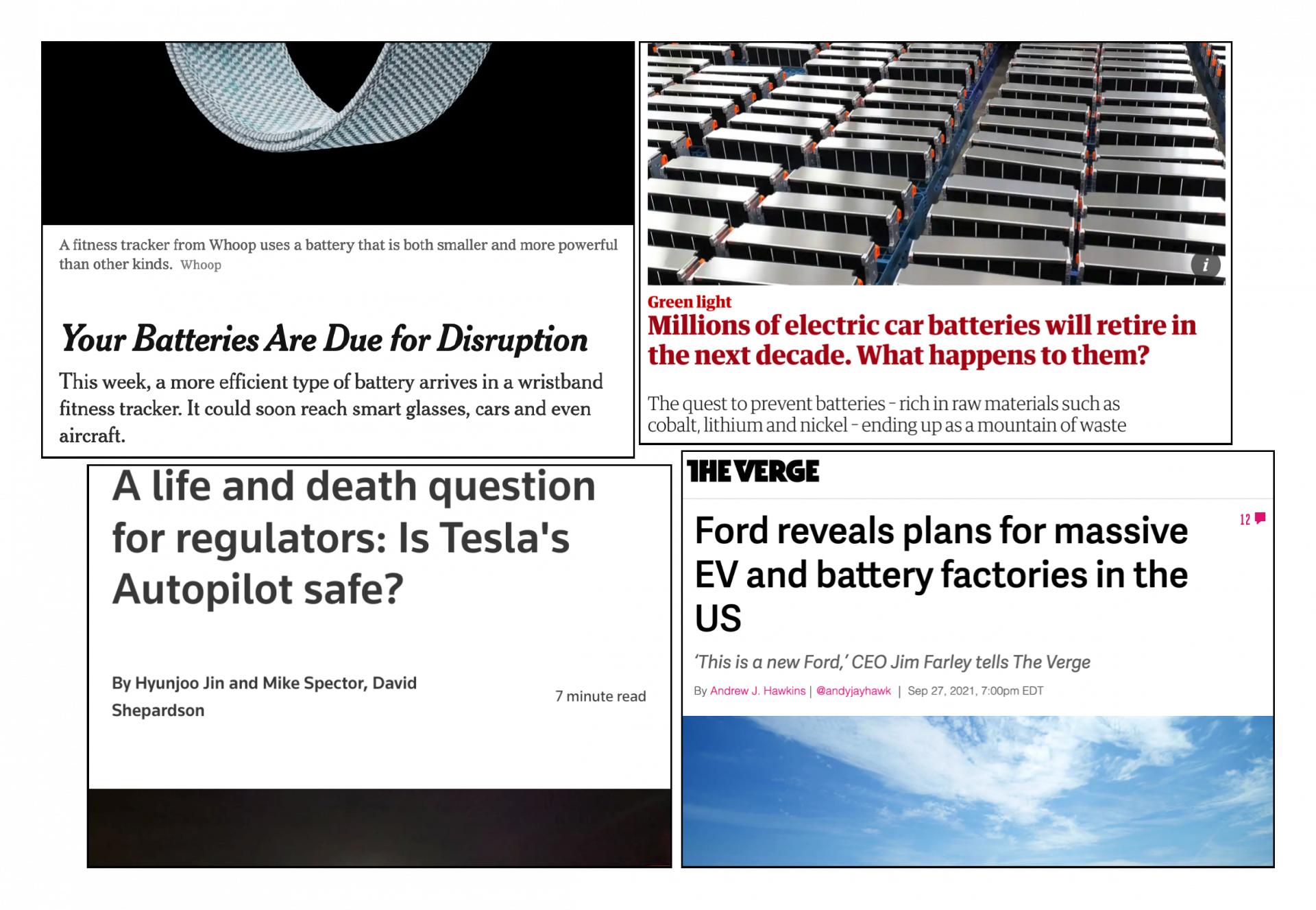 Batteries are in many of the headlines this month — new technologies, factories, supply chains, standards, and recycling methods.

Uber Health Extends Medical Transportation to TX Medicaid Members by Sara Heath, PatientEngagementHIT
“The partnership will boost medical transportation across 4.4 million Medicaid members, addressing a key social determinant of health.
The partnership will allow Medicaid members in Texas to order rides to and from medical appointments via Uber Health and have that benefit covered as part of their Medicaid plan.”

FedEx to test driverless big rig trucks between Dallas and Houston by Shelby Webb, Houston Chronicle
“Autonomous vehicle company Aurora announced this month it has partnered with FedEx and truck-manufacturer PACCAR to begin testing driverless big rigs along the 250-mile stretch of I-45 between Texas’ two largest cities.”

Walmart picks up Argo AI for retailer’s first multi-city autonomous delivery service by Nate Doughty, PITTSBURGHINNO
“When it launches as a pilot program in Austin, Texas, Miami and Washington, D.C. later this year, the new service will be the first in the nation that spans multiple cities, Argo AI said. The service will use modified Ford Escape vehicles equipped with Argo’s self-driving software and hardware to deliver goods and groceries to customers who request the service during checkout on Walmart.com.”

Tesla must deliver Autopilot crash data to federal auto safety watchdog by October 22 by Lora Kolodny, CNBC
“The National Highway Traffic and Safety Administration has added a 12th crash into the scope of its investigation into Tesla’s Autopilot system, and is demanding that the company provide an exhaustive amount of data about its driver assistance systems by Oct. 22.”

A life and death question for regulators: Is Tesla’s Autopilot safe? by Hyunjoo Jin and Mike Spector, David Shepardson, Reuters
“The current NHTSA investigation of Autopilot in effect reopens the question of whether the technology is safe. It represents the latest significant challenge for Elon Musk, the Tesla chief executive whose advocacy of driverless cars has helped his company become the world’s most valuable automaker.”

What Would Our Cities Look Like If AVs Ruled the Roads? by Kea Wilson, Streetsblog USA
“If they ever stop figuring out how to keep them from killing pedestrians, autonomous vehicles could still unleash a second wave of suburban sprawl that makes cities inhospitable to people outside cars in new ways — unless governments adopt policies to soften their impact now, a new study argues.”

It’s a go: Autonomous shuttle service to launch Oct. 11 in Ann Arbor by Meredith Bruckner, All About Ann Arbor
“May Mobility will operate A2GO’s fleet of five autonomous vehicles, including four hybrid-electric Lexus RX 450h vehicles and one Polaris GEM fully electric vehicle, which is equipped to accommodate one wheelchair passenger.”

There is no Li-ion battery recycling standard, but that may be about to change by Michelle Lewis, Electrek
“Lithium-ion battery development and production is rapidly escalating worldwide, yet there’s no standard when it comes to battery designs, materials, and chemistries. And that affects the ability to recycle Li-ion batteries – a vital final stage of their life cycle. But this may be about to change in the US.”

Ford, Redwood form ‘circular’ supply chain for EV battery materials by Paul Lienert, Reuters
“Ford Motor Co (F.N) and startup Redwood Materials said on Wednesday they are partnering to form a ‘closed loop’ or circular supply chain for electric vehicle batteries, from raw materials to recycling. The aim is to lower the cost of EVs by reducing the dependence on imported materials, while also narrowing the environmental impact from mining and refining of battery materials.”

Ford reveals plans for massive EV and battery factories in the US by Andrew J. Hawkins, The Verge
“Ford and South Korean battery manufacturer SK Innovation will spend a combined $11.4 billion to build several new factories in the Tennessee and Kentucky focused on the development and production of electric vehicles and the batteries that power them. The new facilities represent the first new plants built by Ford, completely from scratch, in over 50 years. The Tennessee plant will be a ‘mega campus’ that houses a vehicle-production facility for Ford’s F-series pickup trucks and a battery assembly division, while the twin factories in Kentucky will manufacture lithium-ion batteries.”

Six ways to ensure your transition to electric buses is a success by Amos Haggiag, Mass Transit
“Zero-emission bus fleets are looking increasingly attainable for agencies, some of which aim to be 100 percent electric by 2040.”
“As agencies transition their fleet, they should ensure that their operations team understands and accounts for a host of new electric vehicle parameters”

Your Batteries Are Due for Disruption by Cade Metz The New York Times
“This week, a more efficient type of battery arrives in a wristband fitness tracker. It could soon reach smart glasses, cars and even aircraft.”

Millions of electric car batteries will retire in the next decade. What happens to them? by XiaoZhi Lim, The Guardian
“By one estimate, more than 12m tons of lithium-ion batteries are expected to retire between now and 2030. As the automotive industry starts to transform, experts say now is the time to plan for what happens to batteries at the end of their lives, to reduce reliance on mining and keep materials in circulation.”

It’s time to pay serious attention to the power grid by Zachary B. Wolf, CNN
“People used to talk about the coming threat of changing climate. Not anymore.
Karen Wayland, […] CEO of Gridwise, an alliance of utilities, energy companies and other groups that is pushing for a modernized electrical grid. ‘We’re seeing it already,’ Wayland said. ‘It’s here.'”

MaaS faces its make-or-break moment by Christopher Carey, CitiesToday
“Can MaaS live up to its promise or is it time to move on? Christopher Carey analyses the journey so far and looks to what’s next.”

The Impact of Smartphone Applications on Trip Routing by Dr. Angshuman Guin, Dr. Mohammed Hadi, Dr. Kari Watkins, Dr. Michael P. Hunter, Dr. Md. Shahadat Iqbal, et al
“The goal of this research was to study the impact of such decentralized traveler information on the choice of trip routing by individuals and develop approaches for diversion prediction and traffic management for congestion management.”

Transit Riders Expect Tech, Other Improvements Post-COVID by Skip Descant, GovTech
“A survey of transit riders illustrates some of their concerns around the cleanliness of vehicles, on-time performance and the technology that seeks to improve engagement and the overall experience.” The survey was conducted by TransLoc, a transit technology firm owned by Ford.

Hard times and “fake” financials for Uber and Lyft, a new universal mobility pilot in L.A., AV buses will still…

As we bid farewell (or good riddance, as the case may be) to 2021, here are some news highlights for…