New In the Podcast Playlist

On the 99% Invisible podcast: "Missing the Bus"

An interview with Steven Higashide, author of Better Buses, Better Cities. This is less about technology for transit and more about transit as a technology.

"If you heard that there was a piece of technology that could do away with traffic jams, make cities more equitable, and help us solve climate change, you might think about driverless cars, or hyperloops or any of the other new transportation technologies that get lots of hype these days. But there is a much older, much less sexy piece of machinery that could be the key to making our cities more sustainable, more liveable, and more fair: the humble bus. Steve Higashide is a transit expert, bus champion, and author of a new book called Better Buses Better Cities. And the central thesis of the book is that buses have the power to remake our cities for the better."

The playlist is hosted on the ListenNotes service. From the playlist page located here, you can listen to the episodes directly from your browser or click the “subscribe” button to add it to your podcasting app.

It's interesting to see both Shell and BP make some high-profile investments in transit-focused technologies.

"Masabi, a global developer of FPaaS (Fare Payments-as-a-Service) for public transport, on Feb. 6 announced that it has finalized an investment from Shell, among the world’s largest oil and gas companies."

Why BP investment in MaaS Global is a good thing by Sampo Hietanen, ITS International

The founder of MaaS Global and one of the founders of the concept of mobility as a service itself, explains how BP is a "fascinating" and valuable strategic partner. Has an interesting acknowledgement of how poorly many investments in start-ups by incumbent players have gone.

Why the marriage of Cubic and Moovit is a big deal for MaaS by Frank Jacobs, Global Fleet

Interesting (paywalled) article on Uber's effort to create a new investment vehicle for funding AV fleets — car fleet investment trusts, or "Fleits". These are patterned after real estate investment trusts, or "Reits". Note: I generally avoid severely paywalled articles such as this one, but as near as I can tell no one else has written about this yet.

Uber’s self-driving cars are a key to its path to profitability by Sameepa Shetty, CNBC

Given the kind of things Uber has done in other too-early-to-regulate spaces, it's a bit concerning that AV development is "key to its path to profitability".

AB5 is the new California law that makes it harder for "gig economy" workers to not be classified as employees.

An alternative to Uber and Lyft being tested outside Pittsburgh, Pennsylvania.

There's quite a bit in the news about AVs this month...

An engineering student is helping envision a self-driving future for people with disabilities by Ian Duncan, Washington Post

Jen Schlegel of Ohio State University has developed a plan for an automated paratransit system. She's part of a larger movement, described in the article, for people with disabilities to have a seat at the table very early in the development of AVs.

"An autonomous electric shuttle in Columbus, Ohio, is the latest in a U.S.-funded program testing new ways to knit cities together."

It appears the AV world is moving faster with freight, logistics, and delivery than it is with moving actual people.

Waymo’s Autonomous Trucks Are Rolling Into Texas—And Bringing a Debate About Jobs and Safety With Them by Peter Holley, Texas Monthly

Especially interesting in case you didn't know that Waymo is working AVs for freight as well as passenger vehicles.

The exemption went not to a passenger vehicle, but rather to a delivery robot made by Nuro.

Here’s How Putin Might Instill Russian ‘Spiritual And Moral Values’ Into AI Self-Driving Cars, And Why Some Are Worried About It by Lance Eliot, Forbes

This is an interesting take on a government (Russia, in this case)  getting involvement with how AVs will work that I haven't seen much in the news. Some of the things the article states that a government could do: deny service based on facial recognition, use the vehicles as roving surveillance systems of the public space, and take the rider to a "local government indoctrination center" instead of your requested destination. "For those that don’t think there’s a need to have ethicists and society weigh-in on the advent of true self-driving cars, perhaps this might serve as a wake-up call."

Why Creating An AV Business Is 10,000 Times Harder Than Building Self-Driving Tech by Raphaël Gindrat, Forbes

It's not just sophisticated algorithms, it's fleet management.

The full article is paywalled, but the opening chart is very interesting.

"Fervor for self-driving tech cools, and an accelerator in Detroit shuts down."

Boston Consulting Group predicts that electrified vehicles (which in this case includes "conventional and mild hybrids") will be 51 percent of vehicles sold in 2030.

Running on EV: The race to solve lithium-ion battery recycling before it’s too late by Tamara Warren, Fortune

What to do with all those spent batteries when battery-powered vehicles become dominant.

One of the few articles I've seen about how to address safety systematically for aging drivers.

The Cruise Origin, described above, and an all-electric pickup truck will be manufactured in Michigan.

"Amazon.com, AT&T Inc., DHL Express USA Inc. and other select companies with major delivery fleets and their accompanying heavy carbon footprints are banding together for an electric-vehicle collaboration expected to keep up the pressure on the EV industry and the corporations that dominate American roads."

What do we call all the new small devices for getting around? "SAE International, an international standards organization for mobility engineering, has established a common set of terminologies for describing micromobility vehicles, called 'J3194 – Taxonomy and Classification of Powered Micromobility.'"

"Transportation startup Via announced a new ride-hailing deployment in California in partnership with the Sacramento California Regional Transit District. Using the Via-powered app, customers will be able to summon a public transit vehicle to pick them up."

For Mobility as a Service to succeed, consider it more as a policy than an app by Ethan Goffman, Mobility Lab

The headline says it all.

Some good reasons here. Getting one of the most massive and sudden influxes of venture capital investment didn't exactly lend itself to creating sustainable business models. 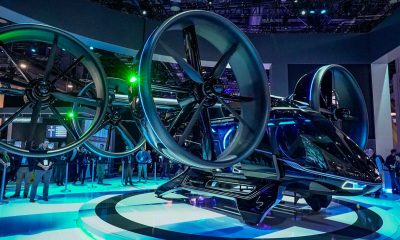 New In the Podcast Playlist On the War on Cars podcast: Kara Swisher Says Car Ownership is Finished. “Last March,…