How is Latin America Planning for the Complete Trip?

The accessibility of public transportation is a global issue. How are other countries changing their understanding of what it means to be fully accessible?

This month, I had the opportunity to listen to a presentation from Darío Hidalgo, former Executive Director of Despacio, on accessibility issues for public transportation users in Latin America. Similar to many communities in the United States, a large number of places in Central and South America are struggling to create accessible routes to and from public transportation. Transportation systems can be accessible themselves, incorporating kneeling buses, elevators to train platforms, and other accessibility measures, but the built environment in the neighborhood surrounding the stop does not. Understanding a trip from the planning phase all the way through the final destination is known as the Complete Trip, and may be what prevents a person with a disability from taking the trip.

Mapas de viaje: Metodología para el diagnóstico y propuestas de mejora de la accesibilidad universal en sistemas de transporte público en América Latina y el Caribe (Currently only in Spanish) dives into the barriers, both physical and mental, that public transportation users can face when using public transportation in Bogota. I wrote about a couple of interesting projects in the US that are trying to tackle this problem, but the project funded by the InterAmerican Development Bank and performed by Despacio gives us a replicable methodology we can use in our communities to better understand what it means to be fully accessible.

Following volunteers with disabilities in three cities; Bogotá, Medellín, and Santiago de Chile, the study set out to map entire trips from start to finish, not just the portion inside of a public transit system. Individuals with a range of disabilities, from people who use a wheelchair to senior citizens to those with temporary disabilities, volunteered to be followed on their trip by an observer. Each trip was divided into three stages; Before – or the planning stages of the trip, During – or getting to the station and using a public transit service, and After – or getting to your final destination. The second stage – During – was broken in nine different sub-stages that correspond to all the needed movements to make a trip successful, from boarding and exiting the vehicle to the individual’s actual positioning within the vehicle itself. The observer would then record issues the passenger faced during each stage, collecting information on the physical movements of the volunteers and their barriers, but also their emotions. All of this information was then compiled into a matrix that became the Mapa de Viaje, or map of the trip. 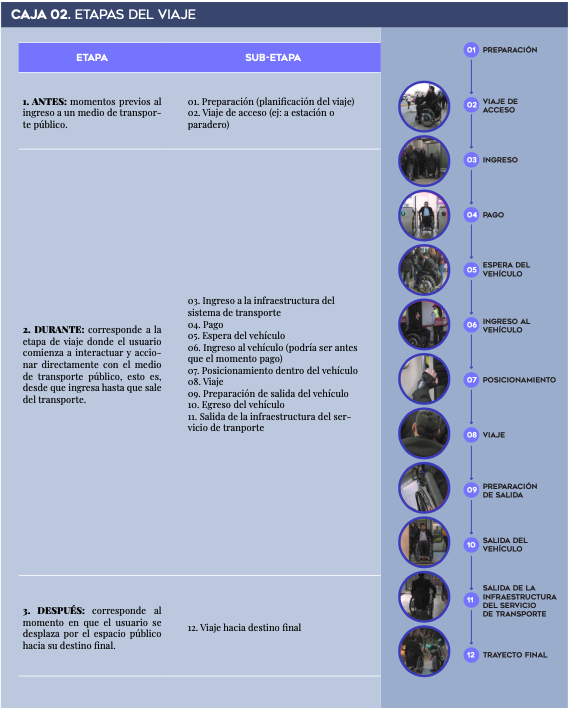 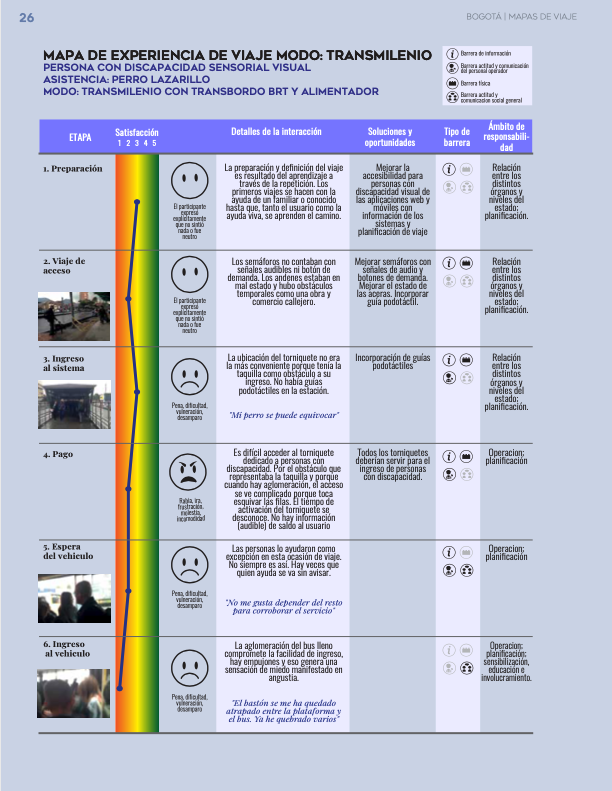 The matrix shows the rider satisfaction during each stage of the trip, details on the interactions that occurred, types of barriers that were faced, and possible solutions that were visible at the moment of observation. The outcomes gave planners crucial information as to how community members interact with the built environment. In a city like Bogotá, where approximately 64% of trips are made on public transit, this has huge implications. The type of information collected in the study is extremely useful for mobility management professionals. The study is now being replicated in Curitiba, Brazil, and the qualitative nature of the data makes this methodology extremely replicable for communities in the United States. This data, combined with other traditional planning methods, or even other built environment accessibility data sets such as Project Sidewalk, can paint an important picture on where we can better meet the needs of all community members when they travel.

You can take your learning to the next level in our eLearning Course “Understanding the Complete Trip.”