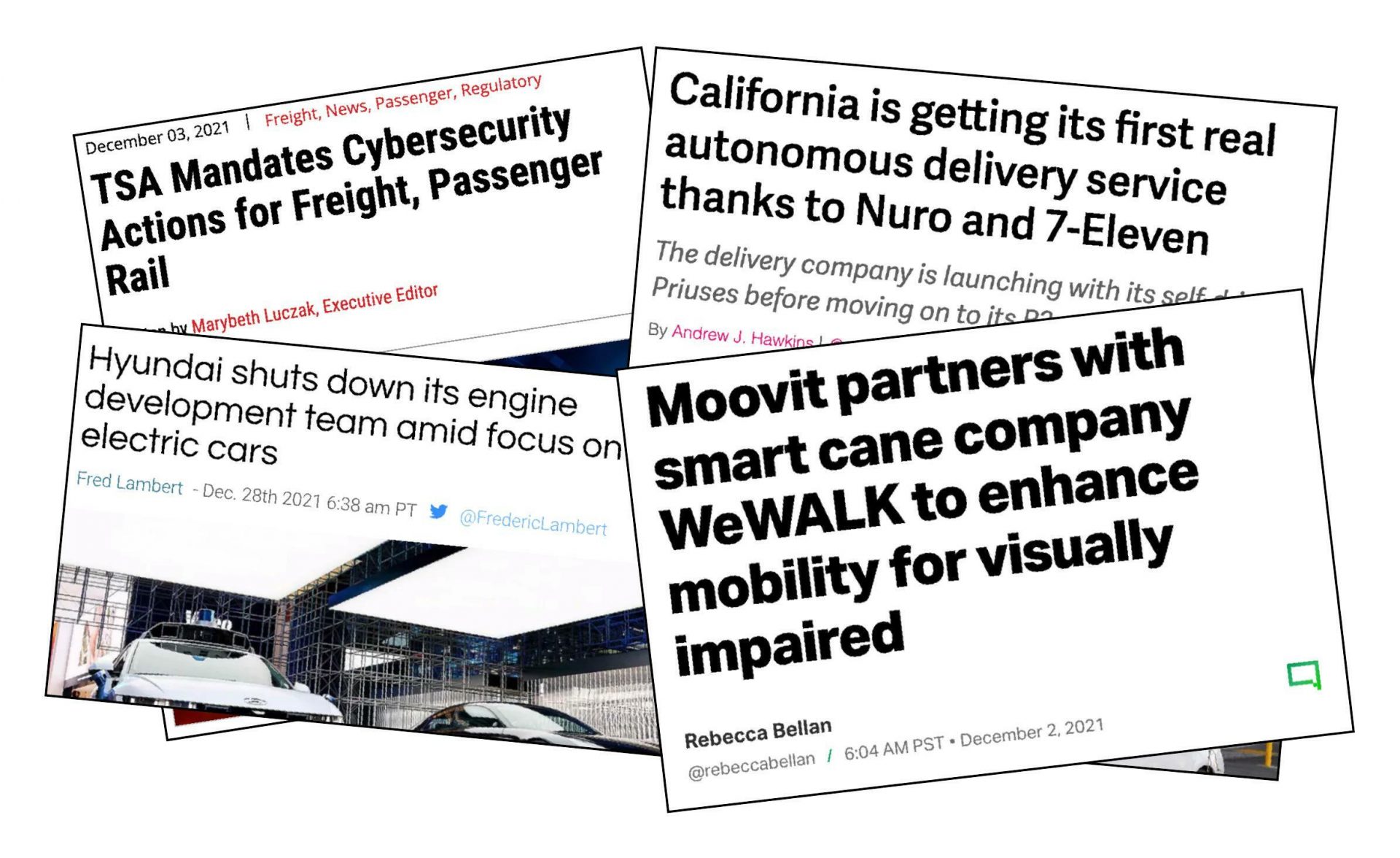 As we bid farewell (or good riddance, as the case may be) to 2021, here are some news highlights for mobility managers who want to stay informed about technology and mobility. Tesla autopilot is under scrutiny, rail gets new cybersecurity mandates, tech platforms Via and Spare get more funding, E-scooter sharing grows, and plain old analog transit maps continue to matter.

To Pool or Not To Pool? By Jessica Lazarus and Susan Shaheen, Transfers Magazine
“Heavy users of Uber and Lyft could be convinced to pool more. That’s a good thing.”

San Francisco agency opposes Cruise robotaxi application, citing safety By Paresh Dave, Reuters
“San Francisco’s public transit operator has challenged an application by Cruise to charge for robotaxi rides, saying on Wednesday promotional videos from the General Motors Co (GM.N) unit show Cruise passengers illegally hopping in and out of vehicles in the middle of the street instead of at the curb.”

Inside Tesla as Elon Musk Pushed an Unflinching Vision for Self-Driving Cars by By Cade Metz and Neal E. Boudette, The New York Times
“As the guiding force behind Autopilot, Mr. Musk pushed it in directions other automakers were unwilling to take this kind of technology, interviews with 19 people who worked on the project over the last decade show. Mr. Musk repeatedly misled buyers about the services’ abilities, many of those people say.”

Tesla test drivers believe they’re on a mission to make driving safer for everyone. Skeptics say they’re a safety hazard. By Reed Albergotti and Faiz Siddiqui, The Washington Post
“At the heart of Tesla’s strategy is a bold bet that the thousands of chosen test drivers, many of whom passed a safety screening that monitored their driving for a week or more, will scoop up enough real-world data to rapidly improve the software on the fly. In navigating public roads with unproven software, Tesla’s Full Self-Driving beta testers have not just volunteered to help, but have taken on the liability for any mistakes the software might make.”

California is getting its first real autonomous delivery service thanks to Nuro and 7-Eleven By Andrew J. Hawkins, The Verge
“Nuro, a leader in autonomous delivery vehicles, is kicking off a new service in California in partnership with 7-Eleven. The company will deliver convenience store products to customers in its autonomous Toyota Prius vehicles, which will include a safety driver behind the wheel, before eventually shifting over to its fully driverless R2 delivery vehicles.”

Aurora self-driving trucks are using Uber Freight to haul goods for customers by Kirsten Korosec, TechCrunch
“Aurora is using the Uber Freight brokerage platform, which connects truck drivers with shippers that need cargo delivered, to haul freight for customers between Dallas and Houston. Aurora said it will expand routes as it adds more terminals.”

Hyundai shuts down its engine development team amid focus on electric cars by Fred Lambert, electrek
“Hyundai reportedly had 12,000 people working on engines, but they are now being transferred to EV powertrain development”

Why Equity Must Be Central to Transportation Electrification by Patrick King, clean energy
“Electric transportation can be both the figurative and literal vehicle to help further social justice and improve the lives and livelihoods of many in low-income and rural communities.”

General Motors makes moves to source rare earth metals for EV motors in North America By Andrew J. Hawkins, The Verge
“General Motors announced a deal to source rare earth metals for electric vehicle motors in North America. Under the agreement, Las Vegas-based MP Materials will supply the automaker with “US-sourced and manufactured rare earth materials, alloy, and finished magnets for the electric motors” that will be used to power GM’s upcoming lineup of electric vehicles.”

Hunt for the ‘Blood Diamond of Batteries’ Impedes Green Energy Push by Dionne Searcey and Eric Lipton, The New York Times
“Batteries containing cobalt reduce overheating in electric cars and extend their range, but the metal has become known as ‘the blood diamond of batteries’ because of its high price and the perilous conditions in Congo, the largest producer of cobalt in the world. As a result, carmakers concerned about consumer blowback are rapidly moving to find alternatives to the element in electric vehicles, and they are increasingly looking to other nations with smaller reserves as possible suppliers.”

As Miners Chase Clean-Energy Minerals, Tribes Fear a Repeat of the Past By Jack Healy and Mike Baker, The New York Times
“President Biden came into office vowing to safeguard Native American resources like these and uphold the rights of tribes that have endured generations of land theft and broken treaties. But in the rolling headwaters of central Idaho, where mining interests have long overrun tribal rights, the administration’s promise is colliding with one of its other priorities: starting a revolution in renewable energy to confront climate change.”

VW Creates New Company for EV Battery Production by Jay Ramey, Autoweek
“Volkswagen creates new European company to manage all aspects of EV battery production, starting from processing raw materials to recycling old batteries. The automaker will build six gigafactories in Europe, including in Germany, Sweden, and Spain, by the end of the decade. VW has recently launched a battery research and development lab in Salzgitter, Germany, which will also be the site of one of the gigafactories, scheduled to open in 2025.”

Transit and Micromobility by Colin Murphy, Terra Curtis, Evan Costagliola, Regina Clewlow, Stephanie Seki, and Ruoying Xu, Transit Cooperative Research Program of the Transportation Research Board
Research Report 230 “provides an analysis of the full benefits and impacts of micromobility on public transportation systems in transit-rich markets as well as in medium-sized and smaller urban areas.”

More cities are embracing scooters, e-bikes. This urban planner sees growth in shared mobility. By Luz Lazo, The Washington Post
An interview with Benjie de la Peña, the new Director of the Shared Use Mobility Center. “Since fleets of electric scooters and dockless bikes entered U.S. cities in 2017, the industry has grown exponentially. Despite a pandemic-induced slowdown, the devices are available in about 150 jurisdictions. They have become part of a growing ecosystem of shared transportation that also includes subsidized bike-share services.”

Is an All-Encompassing Mobility App Making a Comeback? By John Surico, The New York Times
“Like many other so-called tech disrupters, the hype of MaaS has been cooled by real-world realities. Yet efforts still exist: In late October, Austria, for example, debuted its KlimaTicket, or Climate Ticket, where one annual price gets you aboard all public transit in the country. But such innovations have been the exception to the status quo. Now, amid a pandemic that kneecapped transit ridership and renewed urgency over carbon emissions, MaaS — or some version of it — may be mounting a second act, though attempts at expansion face significant obstacles.”

Via raises $130M to expand on-demand shuttle software business by Kirsten Korosec, TechCrunch
“On-demand shuttle and software company Via has raised another $130 million, capital that has pushed its valuation to about $3.3 billion as demand from cities to update its legacy transit systems rises.”

Spare Ready to Roll with $18 Million Series A Funding for Its On-Demand Transit Software by Charles Mandel, Betakit
“An oversubscribed $18 million Series A round is going to help Spare further build out its mobility software platform for public transit, ride sharing, and other shared transportation. The Vancouver software startup hopes its platform will encourage better cooperation between different transportation providers, increased access to cost-efficient shared rides, and will see more people opt for collective transportation.”

Can E-Moped Sharing Help Wean Americans Off Car Ownership? By Kea Wilson Streetsblog USA
“Electric moped sharing became one of the most rapidly growing alternatives to driving in cities around the world during 2021, a new report says — but its future in America may be more modest unless local policies catch up with the mid-speed mode.”

Gov. Murphy Calls For Electric, Self-Driving Transit Proposals by Larry Higgs, nj.com
“The governor’s office has requested that companies submit proposals for building and operating an all-electric, self-driving microtransit system in Trenton that could serve as many as 90,000 people. The state is asking for a system that would be similar to Jersey City’s ‘Via’ program that transports residents by mini van within the city, except this will lack chatty drivers and air pollution from internal combustion engines. That service has expanded since its Feb. 2020 launch.”

Moovit partners with smart cane company WeWALK to enhance mobility for visually impaired by Rebecca Bellan, TechCrunch
“WeWALK’s app will now be integrated with Moovit’s Transit API, which combines official local transit agency information with crowdsourced information to get the best route for each journey, so that visually impaired users can navigate safely on public transit, according to Jean Marc Feghali, WeWALK’s R&D lead.”

Tim Fendley Explains why Analog Wayfinding Tools Matter in a Digital World By Giovanna Dunmall, Metropolis
The founder and CEO of Applied, the design firm behind wayfinding systems for London, Seattle, and Madrid, knows the power of good design to orient travelers in unfamiliar territory.

Transit System Maps Still Matter by Jarrett Walker, Human Transit
“[Maps] give you a sense of possibility.  (It’s the informational dimension of access to opportunity.)  Maps also show visually how different services work together.  Finally, good system maps help people make better decisions about where to locate, or even where to build things.”

Ride-sharing starts to return, Apple and the USPS get more involved in automated vehicles, and more in a recurring series…