This was guest-written by MassMobility in partnership with CrossTown Connect. 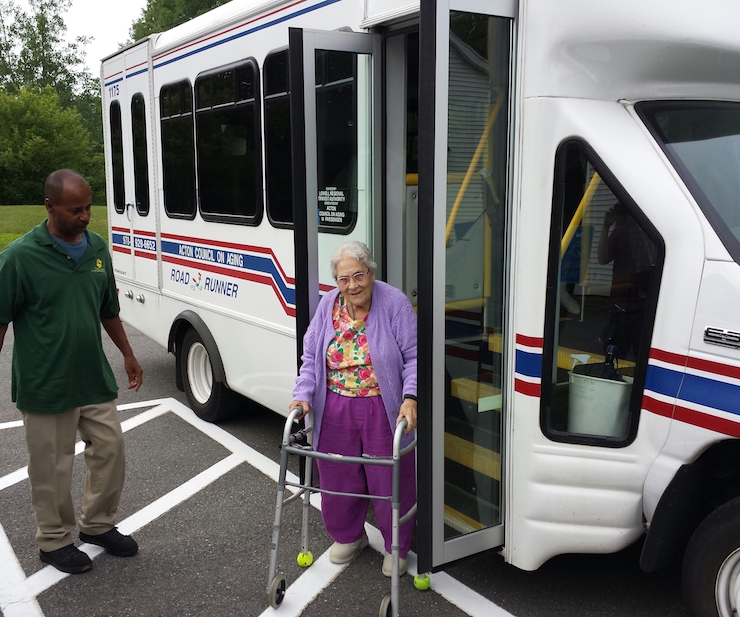 One of the most successful regional transportation coordination initiatives in Massachusetts got its start nearly 10 years ago, thanks in part to a predecessor of today’s National Center for Mobility Management. Today, CrossTown Connect provides a range of transportation services to older adults, people with disabilities, employees, and the general public in seven towns about 25 miles northwest of Boston.

In 2009, stakeholders from across Massachusetts converged for the Massachusetts Institute for Transportation Coordination. Hosted by statewide disability employment initiative Work Without Limits, the institute brought national experts to Massachusetts to share information, strategies, and tools for transportation coordination and mobility management with nine participating teams, each representing a different region within Massachusetts. A team representing the Acton area included town planners, Commission on Disability members, a Selectman, and a local resident passionate about expanding transportation for her community.

Through the Institute, the Acton team brought forth a vision of expanding mobility for the general public – including seniors and commuters – and finding efficiencies to ensure that all transportation resources were optimized. They focused initially on two resources already present within their town: the commuter rail and the senior van.

The commuter rail takes local residents to work in Boston and brings reverse commuters from the city to local employers. However, the parking lot at the train station filled up by 7 AM, leading many residents to drive into Boston instead of riding the train, and the first train from Boston arrived after 9 AM, too late to be of much use to local employers looking to recruit employees who lived in the city. Each town operated its own Council on Aging van or vans to help seniors travel within town and to nearby towns for medical appointments. Regularly, multiple senior vans from different towns would all be waiting outside the regional hospital at once, each transporting only a few riders – who could all have fit on one vehicle. The Acton team saw potential to increase usage of both the train and the senior vans – thereby expanding mobility for area residents.

Although their vision was broad and ambitious, they made progress one step at a time. They built political support for a rail shuttle that would run between overflow parking lots and the train station, to open up more parking to residents seeking to commute by train, and worked with their state legislative delegation to pass a law allowing municipalities to use parking revenues to run shuttles. They worked with the state Department of Transportation (MassDOT) and other partners to advocate for – and ultimately get – earlier morning runs from Boston to Acton and nearby towns for reverse commuters. With assistance from a state regionalization and innovation grant, they worked with local Councils on Aging in each town to regionalize the dispatch services for senior vans. Now instead of each town staffing a phone line for trip reservations a couple hours a day, the towns pooled their resources to hire two full-time dispatchers. Seniors could now call any time during the day, and the dispatchers could schedule the rides more efficiently. Along the way, CrossTown Connect incorporated as a Transportation Management Association (TMA), the first municipally-led TMA in Massachusetts, which counts employers as well as towns as members.

One town in particular, Acton, was extremely interested in increasing local transportation options. Acton piloted a municipal demand-response service called the MinuteVan to supplement the existing senior van, and soon garnered high ridership from an unexpected audience: youth. High school students used the MinuteVan to get home after staying late at school for extracurricular activities. Over time, the success of the MinuteVan led Acton to further expand demand-response services and even pilot a fixed-route bus, using data about popular demand-response destinations to inform the development of the fixed route. More recently, CrossTown Connect has also worked with other towns to pilot employment transportation shuttles, taking residents to the train and bringing train commuters to area employers. One such shuttle made use of a senior van to make runs during commuting hours – before and after the Council on Aging needed the vehicle.

Along the way, one of the most formidable barriers CrossTown Connect encountered was that their region overlaps the service areas of two different transit authorities. When they broached the subject of using senior vans from one town to pick up riders in another town – to increase efficiency – the transit authorities were initially hesitant. Eventually, with assistance from MassDOT and the support of the Governor’s Office, the two transit authorities developed and signed a Memorandum of Understanding to make this possible. As a result of this and the joint dispatch, ridership for each town has grown substantially, and cancellations have dropped.

Never content with the progress already made, CrossTown Connect continues to build on their accomplishments, always on the lookout for additional ways to increase mobility and access. Currently, they are exploring options to bring more taxi service to the region and make it affordable for low-income riders.

As we come up on 10 years since the Institute first brought CrossTown Connect together, we have a lot to learn from their successes. First, bring many different partners to the table. Their ability to unite senior-serving organizations with employers toward a common goal is a source of strength. Second, weave together many different funding streams. CrossTown Connect has been successful at getting state grants from various state agencies, using local funding creatively, securing contributions from local employers, and even raising revenue through Town Meeting. Third, community transportation initiatives can successfully break out of silos and serve many populations at once, including the general public, commuters, and youth. Finally, do not get discouraged if you cannot achieve your entire vision at once: if you make progress one step at a time, you will get there.

Toward Universal Mobility in the Chicagoland Region

Microtransit: On-Demand and Open to All

Changing travel behavior and customer expectations are some of the main factors driving rapid innovation in the mobility ecosystem. Throughout…

Over the past ten years, The Kansas City Area Transportation Authority (KCATA) has used the principles of mobility management to…

There is a niche commuting pattern in some large metropolitan areas: casual carpooling. The practice is most common in San…

Land Use and Mobility Management

Decades of suburbanization across the United States has been a major contributor to our current host of mobility issues. Low-density…